Take a trip back in time in the retro-styled Double Flame Blazing slot. This online slot machine features a gameplay hot off the plate with animated flames, including a special design by Spadegaming that allows you to compete for a jackpot prize. There are popular symbols that will bring nostalgia to avid slot players, and you can enjoy loads of increasing multipliers to get bigger wins.

Increase the flaming heat of the retro-themed slot game that has a huge jackpot prize. Spadegaming is famous for taking old-fashioned slot games and adding a modern impression to provide new innovative gameplay.

To win, you have to match at least three symbols in a combination starting from left to right. Some of the symbols you will come across include familiar icons such as BAR, golden bells, cherries, and different colored 7s.

How to Play Double Flame Blazing

The classical-themed game has five reels with an additional ‘Blazing’ reel, three rows and 25 paylines. The Double Flame Blazing slot might have traditional symbols but the gameplay is very innovative. The most valued icon is the diamond symbol which acts as the wild in the game and will substitute all other symbols to form a winning combination except Fast Hit, Fire Shot, and Bonus symbols.

There is no scatter symbol in the game. If you land five diamond symbols in the base game, you will be rewarded with a prize. To unlock the bonus round, you have to land three or more Fast Hit symbols to trigger the Fast Hit Feature. What’s more, the more symbols that appear on the reels, the higher the prize in store. The prize can go as high as 350x.

If you think you can take the heat, the temperature is turned up with each bonus feature in the game. Every round brings you closer to winning the maximum prize!

The last reel on the right is denoted as the Blazing Reel, which rotates concurrently with other reels on the layout. However, landing matching symbols on the sixth reel can reward you with multipliers up to 10x. The reel is special because it increases your chances of landing bonus symbols which can unlock the bonus round in the game.

The mini-games use three reels with the BAR and 7 symbols available to land. The low prize mini-games reward up to 9x. However, the high prize games include the Diamond Flame, Double Blaze, and Triple Blaze mini-games. During the games, if you hit the Flaming 7 Times Pay bonus symbol, you will receive a spin on the highest prize game. The rewards start from 1x prizes for landing the cherry symbol in a single payline to the max win 350x for matching three.

You can trigger the Fast Hit feature by landing at least three or more of the Fast Hit symbols. Each symbol multiplies your prize starting from 1x, 4x, 9x, 20x, 55x, 150x up to 350x if you can land nine symbols on the reels. 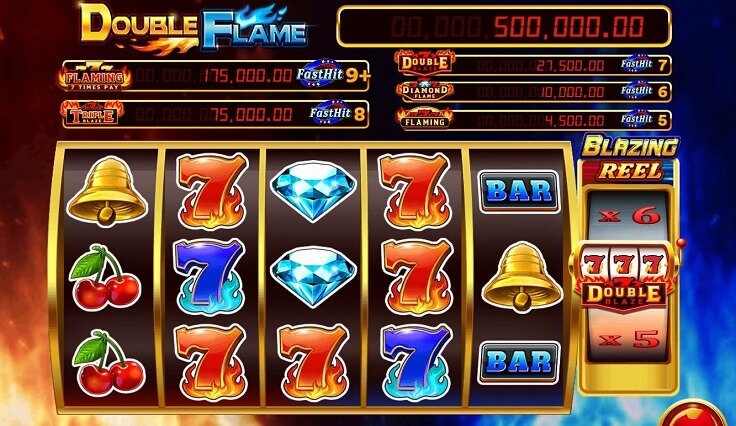 It doesn’t end there! The last feature is the Bonus Wheel round. If you land three Bonus symbols, you will receive a single free spin in the Bonus Wheel feature. During the spin, you can win additional free games, or the coveted Double Blaze prize! This Double Blaze round offers you the chance to win the ultimate Double Flame Blazing Reward! 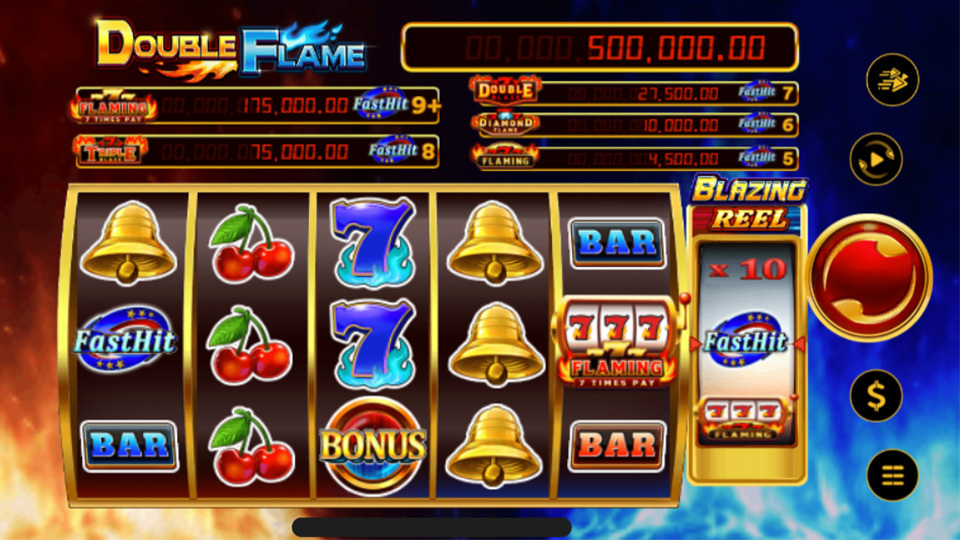